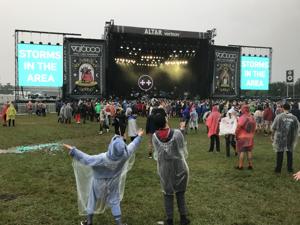 In a surprise move given how quickly New Orleans nightlife is reopening and returning to normal, organizers of the Voodoo Music + Arts Experience announced Thursday that the festival will “take a pause” in 2021 and return to New Orleans’ City Park in 2022.

Voodoo had originally been scheduled for Halloween weekend, Oct. 29-31.

Beau Tidwell, a spokesperson for Mayor LaToya Cantrell, said that the city did not force the festival to cancel.

“There was no communication from the city to Voodoo Fest organizers that they could not proceed,” Tidwell said.

The festival’s announcement about the cancellation, released via social media, did not give a reason. The statement read, “Voodoo Music + Arts Experience will take a pause in 2021 and will return to City Park for an epic Halloween experience in 2022. As our city reopens with an abundance of events to reconnect with, we look forward to holding our reunion when we can fully embrace the Voodoo Experience.

“Current ticketholders will receive an email from front gate tickets within the next 24 hours including information about rollover and refund options.”

Voodoo is produced by C3, an Austin-based subsidiary of Live Nation. C3 also produces the Austin City Limits Festival in Austin, which recently announced its lineup.

The 2020 edition of Voodoo was canceled, along with every other festival in New Orleans, because of the coronavirus pandemic.

Festivals that would have normally have been held in spring 2021 were postponed to the fall. Voodoo was expected to occupy its traditional Halloween weekend this year.

Given the other postponements, it would have been the fifth consecutive festival weekend in New Orleans.

The French Quarter Festival is scheduled for Sept. 30-Oct. 3, followed by the New Orleans Jazz & Heritage Festival from Oct. 8-17 and BUKU: Planet B on Oct. 22-23. BUKU, which is staged on the grounds of Mardi Gras World, announced its roster this week.

This is a developing story.

The 2021 Satchmo SummerFest presented by Chevron will be a live, in-person event in and around the New Orleans Jazz Museum this summer, organi…