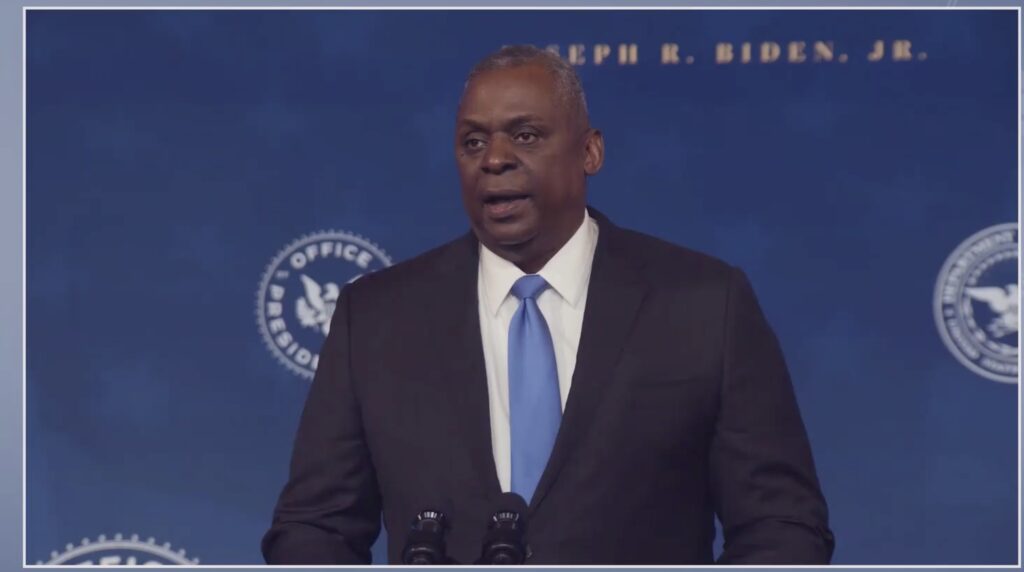 Lloyd Austin after being nominated by President-elect Joe Biden in Delaware on Dec. 9

CLARIFICATION: Updated to add Air Force clarification that Shawn Barnes was not the author responsible for Q&A responses.

WASHINGTON: Resilience and norms of behavior and China. Put those three references in Lloyd Austin’s written responses to the Senate Armed Services Committee together and you’ve got a pretty idea of the (expected) shift in the Biden administration’s rhetoric.

What’s the shift? The language signals that the Biden team wants to “start to lean away from … the pugilistic aspects of what’s been articulated [by the Trump administration] to the ‘more resilience’ aspects,” said one space policy wonk in the know. “We all know that’s going to be the case; we don’t know how hard that lean will be, and how fast that lean will go.”

Interpreting written testimony from incoming administration nominees for DoD posts is an art — often reminiscent of Cold War era Sovietologists comparing photos of the Kremlin to see who is standing where at what time, and who has been brushed out. In most cases, the testimony and answers to written questions have been crafted by a committee, made up of both outgoing DoD officials as well as transition team members and even outside advisors, rather than the principals. Sure, the principal reviews the drafts, but unless there is an issue about which that person feels strongly, the word-smithing is crafted to be as vague as possible so as to hew the organizational line and offend no one on the Hill.

But there are always clues and Austin’s Q&A is no different. For example, his responses use the word “resilience” five times, and the word “warfighting” four times. Further, one of those four mentions of warfighting is in a sentence explaining how “resilience” is key to maintaining US capabilities during any conflict; another is about how space capabilities support other services.

Of course, no one expects DoD and the Space Force to suddenly eschew taking up arms — indeed, Austin clearly articulated the current Pentagon stance that the US needs both defensive and offensive capabilities to counter Chinese and Russian threats. That said, Austin’s answers just as clearly represent a change in tonality toward a different balance in emphasis.

Asked about any changes to the 2018 National Defense Strategy regarding space he might recommend, Austin said: “Since the NDS was developed, the recognition of the central role space plays in supporting other services in their warfighting role (emphasis ours) continues to grow. If confirmed, I will ensure the space domain is carefully considered across the range of upcoming strategic reviews.”

The shout-out regarding the mission of Space Force and Space Command to support other services and other types of military operations is noteworthy, given the loud DoD public relations campaign during the Trump era — led by Gen. Jay Raymond who at one time commanded both — to assert a shift to space operations as warfighting operations. Raymond and other senior officers repeatedly stressed that the force was moving beyond its traditional support role.

Austin said that because the strategic environment, especially regarding space, is evolving rapidly, it would be advisable to consider policy shifts.

“For space in particular, I would account for the continued growth of adversary space and counterspace capabilities, as well as the adequacy of the steps the United States has taken to improve the DoD space enterprise to address growing threats and challenges in the domain. I would also emphasize the role of resilience in improving our warfighting capability, (emphasis ours) the role of allies and partners, and space-related information sharing. Lastly, I would highlight growing commercial activities in space which can both be threats to and opportunities for the United States.”

Further, in response to a question about his advice to Space Command about military space operations, Austin again stressed measures to protect US assets that don’t include offensive options for taking the fight to adversaries.

“The command must be able to protect and defend US interests, and in particular be able to manage escalation and crises in space. I would also direct that DoD space activities contribute actively to shaping a space domain that is secure, stable, and accessible and to deterring threatening or irresponsible behavior in space. This would require that in addition to nurturing technology innovation in-house for resilience, SPACECOM work within the Department and across the government to build strong alliances in space, develop norms and standards of behavior, and increase partnerships with commercial space entities,” he said. “Lastly, the commander should emphasize not just wartime roles of space warfighting, but also peacetime roles of ensuring access to space for the US and our allies.”

To no one’s surprise, Austin stressed China as the “pacing threat” for US military space capabilities. But in the very next sentence, Austin called for development of norms of behavior to help staunch great power competition with China and Russia. (Interestingly, “China” and “norms” both appear four times in the Q&A.)

Austin went on to note that threats to national security space assets are not just from adversaries bent on degrading or destroying them — there are also threats from unregulated activities by non-hostile countries and commercial actors that could pollute orbital regimes or otherwise harm satellite operations.

“Other countries not considered adversaries or hostile to US interests are conducting space activities of concern, and there are few norms or guidelines to dictate how it should be done. This lack of transparency in the space domain is a risk to U.S assets and cause for concern,” Austin explained. “Last but not least, growing private activities in space (according to some projections, there will be as many as 54,000 new satellites in orbit in the next decade, mostly privately-owned and operated) are a risk to the United States in the sense that the government needs to ensure that they do not collide with expensive and exquisitely capable government assets.”

While Austin also addressed the long-burning question of how DoD will organize its myriad bureaucratic agencies/entities charged with space acquisition, his answers revealed little about what the Biden administration might actually do. CLARIFICATION BEGINS: A Department of the Air Force spokesperson clarified that Shawn Barnes, who currently is the de facto space acquisition lead and is continuing to serve during the transition, “did not write the responses for Austin’s testimony, although he did contribute information related to space acquisition to OSD for their use in assisting Gen. Austin prepare for his testimony.” CLARIFICATION ENDS.

As Breaking D readers know, DoD and the Air Force has yet to answer Congress’s call for an independent space acquisition authority under the Space Force to consolidate at least some of the 60 or so fiefdoms with some say in what space systems are bought when, using what acquisition methodologies.

“If confirmed, I would continue to work with Congress to refine the Department’s acquisition innovation initiatives, including the Adaptive Acquisition Framework, to accelerate delivery of operational capability, effectively reduce program risk, and enhance the nation’s ability to respond to an evolving and ever more capable threat,” Austin said.

That framework is the draft plan, never formally approved, sent to Congress by the Air Force in May and then rapidly withdrawn. It contains nine recommendations for space acquisition reform, three of which would require appropriators’ approval.

Up to now, the Air Force has pushed back on Congress’s mandate to fold the Space Development Agency (SDA) in particular into a new space acquisition organization — currently designated as Space Systems Command under the Space Force. Instead, it has suggested that SDA be able to remain independent until at least 2023.