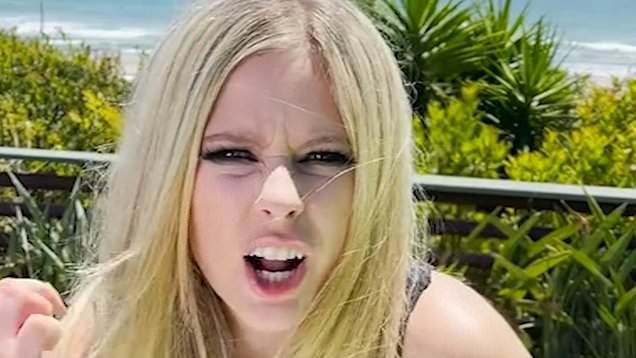 For a certain group of millennials and , the noughties can be summed up by striped ties, chequered Vans and solely listening to music from the soundtracks of Tony Hawk Pro Skater 1 and 2.

So for those people, Avril Lavigne has delivered a real gift.

The pop punk princess has made her TikTok debut with the most early noughties mash-up we can imagine – enlisting Tony Hawk for a rendition of Sk8er Boi.

The only question we have is, how did we not have this sooner?

Avril, 36, threw it back in 2002 in her very first TikTok video, rocking the black vest, shorts, striped tie and poker straight hair that were her trademark when she burst onto the scene.

She sang her hit Sk8er Boi while perched on a half-pipe, and captioned the video: ‘He was a…’

When the song hit the chorus, the video to cut to skateboarding legend Tony Hawk, 53, who wore the same tie as Avril and performed a few tricks on his board.

It’s been almost 20 years since Avril released her smash debut album Let Go, which featured the hit singles Sk8er Boi – which  earned a nomination for best female rock vocal performance at the Grammys – Complicated and I’m With You.

The Canadian singer went on to have a number one album with Under My Skin, and has released a further four albums, including 2019’s Head Above Water.

However, while she is still sticking with her pop punk style, Avril isn’t quite the boarder we expected, as she shared a video of herself stacking it on a half-pipe last month.

In the video, Avril’s boyfriend Mod Sun cheered on the singer as she tentatively skated while wearing slippers and a dress.

Turns out slippers aren’t the best skating footwear, as Avril took quite a tumble, and captioned the clip: ‘Hope this makes you laugh as hard as it’s made my friends and I laugh all week. That’s what I get for sk8ing in my slippers and dress.’

Mod Sun commented: ‘Ur the cutest thing on this planet.’

The pair, who collaborated on the song Flames, began dating earlier this year and have been pretty much inseparable, being spotted on many dates as well as double dates with Machine Gun Kelly and Megan Fox.

Mod Sun, real name Derek Smith, was previously in both monogamous and polyamorous relationships with Bella Thorne and Tana Mongeau.

Meanwhile, Avril has been married twice – to Sum 41’s Deryck Whibley from 2006 until 2010, and to Nickelback’s Chad Kroeger from 2013 until 2015 – while she also previously dated Brody Jenner.


MORE : Dominic Cooper has fifth car stolen from outside his house in a year as he appeals for information from fans