Today I’m giving away An Apprentice to Elves by Elizabeth Bear and Sarah Monette! The third Iskryne book, which follows A Companion to Wolves and The Tempering of Men, was just released yesterday. I enjoyed the first two books in this series, especially A Companion to Wolves, and both authors have written some of my favorite fantasy books: Sarah Monette’s Doctrine of Labyrinths series and The Goblin Emperor (as Katherine Addison) and Elizabeth Bear’s Edda of Burdens trilogy, Range of Ghosts, and Shattered Pillars. Those in North America are eligible to enter this giveaway for a hardcover copy of An Apprentice to Elves, and more details are below! 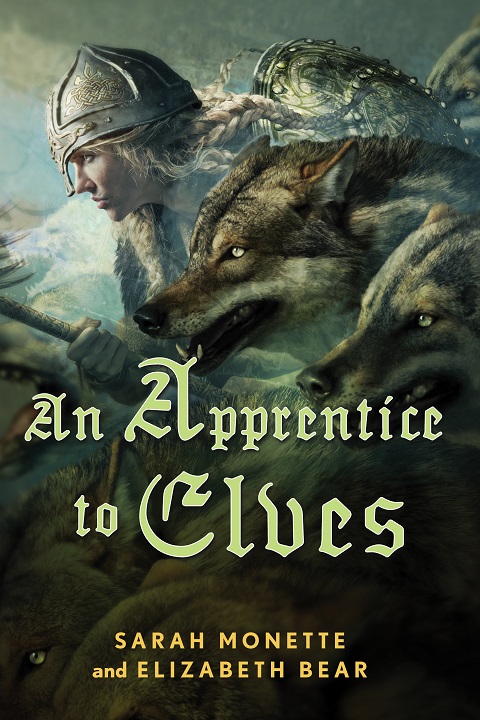 ABOUT AN APPRENTICE TO ELVES (read an excerpt):

Sarah Monette and Elizabeth Bear return with the third book in their Iskryne trilogy, AN APPRENTICE TO ELVES (A Tor Hardcover, $26.99, On-Sale: October 13, 2015). The third collaboration between renowned fantasy writers Bear and Monette, the trilogy began with A Companion to Wolves, and continued in The Tempering of Men. Separately, Bear and Monette have been nominated for and won the Nebula, Hugo, World Fantasy, and Locus awards – among others. Together, they have created the world of the Iskryne, a warrior culture with telephathic wolf companions.

AN APPRENTICE TO ELVES picks up the story of Alfgyfa, a young woman who has been raised in the Wolfhall by her father, Isolfr. The warrior culture of Iskryne forbids many things to women-and most especially it forbids them bonding to one of the giant telepathic trellwolves. But as her father was no ordinary boy, Alfgyfa is no ordinary girl. Her father has long planned to send his daughter to Tin, a matriarch among the elves who live nearby, to be both apprentice and ambassador, and now she is of age to go.

Publishers Weekly declares that Bear and Monette “have boldly created a fascinating world that begs further exploration” and RT Book Reviews points out that “Monette and Bear each excel at creating unique worlds… It’s no surprise that this joint effort combines their strengths into something extraordinary.” The third book from this stellar team is the perfect place to dive into their fascinating world.

SARAH MONETTE is the acclaimed author of Mélusine and The Virtu as well as award-nominated short fiction. Her most recent fantasy novel – written under the pseudonym Katherine Addison – The Goblin Emperor, won the Locus Award for Best Fantasy Novel and was nominated for the Hugo, Nebula, and World Fantasy awards. You can visit her online at http://www.sarahmonette.com/.

ELIZABETH BEAR was the recipient of the John W. Campbell Award for Best New Writer. She has won two Hugo Awards for her short fiction, a Sturgeon Award, and the Locus Award for Best First Novel. You can visit her online at http://www.elizabethbear.com/.

Together, they are the authors of A Companion to Wolves, The Tempering of Men, and An Apprentice to Elves.

Courtesy of Tor Books, I have one hardcover copy of An Apprentice to Elves to give away! This giveaway is open to residents of North America only.

Giveaway Rules: To be entered in the giveaway, fill out the form below OR send an email to kristen AT fantasybookcafe DOT com with the subject “Apprentice Giveaway.” One entry per household and one winner will be randomly selected. Those from North America are eligible to win this giveaway. The giveaway will be open until the end of the day on Friday, October 23. The winner has 24 hours to respond once contacted via email, and if I don’t hear from them by then a new winner will be chosen (who will also have 24 hours to respond until someone gets back to me with a place to send the book).

Please note email addresses will only be used for the purpose of contacting the winner. Once the giveaway is over all the emails will be deleted.

Update: Now that the giveaway is over, the form has been removed.