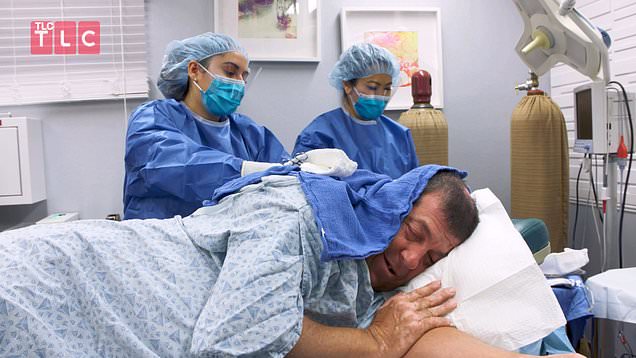 Dr Pimple Popper is back at it and this time she’s helping a man who feels like ‘The Hunchback of Notre Dame’ due to a huge bump on his neck.

After suffering from the lump for more than 10 years, 51-year-old Paul decided enough is enough and sought the help of Dr Pimple Popper (Dr Sandra Lee).

‘About 10 years ago I started having sciatic nerve problems. When I got put on steroids to eliminate the pain, it made this thing [the lump] start growing,’ he explained.

‘My sciatic nerve problem finally went away and I quit steroids. But the lump is still growing and getting bigger and bigger. It was the size of a softball, and now it’s probably tripled in size.’

Recalling his struggles with the lump on the TLC show, he added: ‘I try to hide it as much as possible.

The lump led to name-calling, which Paul spoke about while getting emotional.

‘It rips apart your soul. You almost want to crawl under a rock,’ he explained.

After she’s helped someone get rid of ‘caterpillar cysts’ and removed 14oz lumps from a woman’s ears, clearly there was only one person for the job.

Chatting to Paul, Dr Lee wasn’t convinced that the lump was anything to do with his sciatic nerve problems and instead diagnosed him with a lipoma, which is much more common.

‘I feel like you have a head behind your head,’ she joked, before confirming her prediction.

However, it’s definitely not smooth sailing, as she added that it’s one of the most difficult she’s had to deal with.

Despite comparing the procedure to ‘pulling the cheese off the top of a pizza,’ she eventually managed to pull the last of the lipoma free – leaving Paul ecstatic.

‘She took a lump and turned it into a smile!’ he beamed.

The trailer for the third series of the one-of-a-kind show sees certified dermatologist Sandra back in her element, helping patients get rid of some extreme and unusual cases of skin and facial disorders at her clinic in California.

It seems that no condition is left untouched in the new installment, with one man requesting help with nodules so big on his nostril that they’re preventing him from breathing properly.

Meanwhile a young patient arrives with a large dark patch on his neck, explaining that he’s heard people screaming at him ‘poop neck’.

Truly, nothing is off-limits.

Dr Pimple Popper airs on Thursdays at 9pm on TLC.