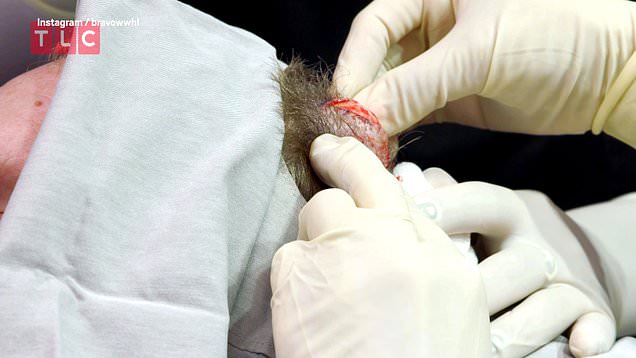 Dr Pimple Popper herself Sandra Lee is left with her most gutwrenching surgery to date as a man’s pus-filled cysts the size of a goose egg on his head explodes.

In the last of the current series of the grimly fascinating surgery series, Dr Sandra meets Eric, a 34-year-old whose life has been changed forever by the sudden appearance of a growing bump in his head.

Going to the doctors for the sake of his wife Ronelle and Evie, their 10-year-old daughter, Eric gets Dr Sandra Lee to investigate the lump in the hope it’s safe and nothing serious.

Evie considers it her dad’s on/off button and often plays with it, but after it’s grown following an accident at work, Eric knows it’s time to cut it out.

The prominent bump though gives both Sandra and Eric more than they bargained for though when she begins to go at it with a scalpel – and as she presses it to relieve the pus inside, it immediately explodes, spraying up her arm.

A mortified Eric tells her: ‘Oh good lord, I’m sorry’ but thankfully, Dr Lee isn’t only used to it, but enjoys it.

The thick and rancid goo is soon removed from his head as she explained it was a pilar cyst – which are ultimately harmless to their long-term health.

‘Pilar cysts are probably the cysts that tend to get me the most, and that’s because it has a thicker wall sack,’ she said. ‘And it’s particularly satisfying to squeeze it and get it out whole!’

We’re going to leave that one to you there, Dr Pimple Popper.

Thankfully after eight years dealing with the injury, Eric was back to normal.

Explaining what happened, Eric said: ‘About eight years ago I was at work and I was struck by the bucket of an excavator. I woke up on the ground and I had a big goose egg on my head.’

‘It’s very painful now,’ he added. ‘If I’m doing something and I hit it, it’s the equivalent of taking a fork and poking yourself in the head, real quick but real good.’