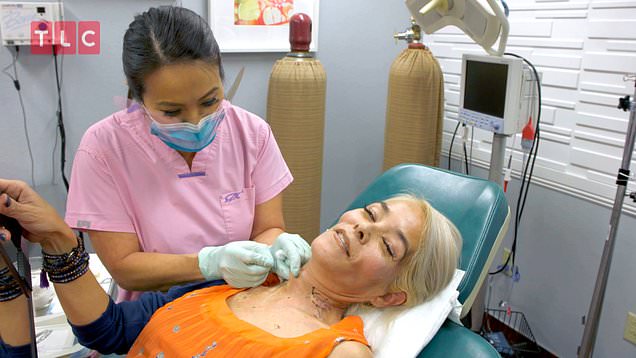 Dr Pimple Popper is back and this time she’s faced with squeezing a woman’s 50 ‘caterpillar cysts’ that ooze out ‘like hand-soap.’

Yep, not all heroes wear capes.

In tonight’s upcoming episode of the forthcoming TLC series, Dr Sandra Lee meets patient Juliet who has been harvesting a number of cysts for over two decades.

During the surgery, which goes on for hours, she explains to the cameras: ‘Julet definitely has steatocystomas and they’re definitely really pretty ones.

‘They look like they’re coming out nice and pristine, like you would squeeze some beautiful hand soap or moisturiser into the palm of your hand.

‘It’s very satisfying seeing them pop out of the skin.’

Sandra narrowly avoids a vein during the procedure too, noting: ‘We missed the vein, that’s good.

‘I got the steatocystomas, I avoided the vein. I’m just gonna pat myself on the back.

Elsewhere in the episode, Dr Sandra meets 29-year-old cosplay enthusiast Jennifer who struggles to go about her daily life due to four massive, ‘Haggis-like’ growths on both of her ears.

After suffering with the lumps, which have been dangling above her ear canal for the past 11 years, Jennifer reveals just how much discomfort they cause her.

‘They cover the openings of my ears,’ she explains. ‘I tend to have muffled hearing, they’re incredibly painful and they cause headaches, they make me nauseated.

Jennifer has remained clueless about her cysts for years, telling cameras: ‘I had originally had piercings in both ears and they both got infections.

‘They did not want to heal at all. The doctors that I saw did not know what they were. When I explained to them that I previously had piercings, a lot of them felt like it was something I caused myself, that it was my problem and that I had to deal with it.’