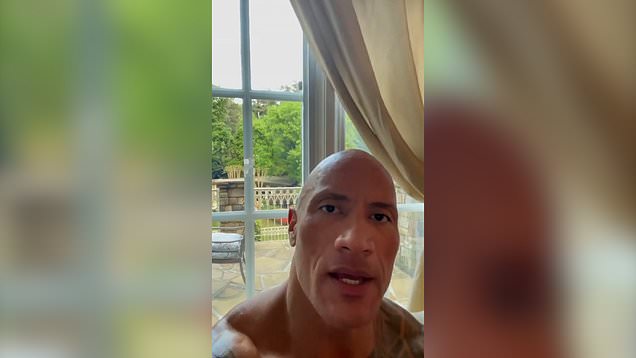 Ashley Cain has received a heartfelt video message of support from actor Dwayne Johnson amid his daughter Azaylia’s battle with leukaemia.

Eight-month-old Azaylia has been diagnosed with a rare and aggressive form of leukaemia and was brought home from hospital last week after doctors told Ashley and his partner Safiyya the devastating news that the cancer treatments were no longer working.

Proving the family has the world behind them, Dwayne – aka The Rock – sent a video message to Ashley with warm words of encouragement for ‘little lion’ Azaylia.

Dwayne began: ‘I want to tell you I’m so sorry about your beautiful daughter Azaylia. You tell that little lion that I said, “let’s go champ and to stay strong”.

‘Brother I’m so sorry to hear this news but I don’t have to tell you that your daughter’s strength is what strengthens you.

‘She’s already had this incredible impact on the world already, stay strong brother, my heart breaks for you.’

Dwayne, 48, revealed that he’d been alerted to Ashley’s heartbreaking plight by a friend and felt compelled to send his love.

‘I’m so proud of my little girl and so humbled by the impact she’s had on so many people around the world. From one of my hero’s to another… Let’s Go Champ! ✊🏾❤️ #AzayliaDiamondCain.’

The Ex On The Beach star has kept his followers updated on Azaylia’s health and has raised more than £1.5million through a GoFundMe page.

Ashley and Safiyya had hoped to use the donations to take Azaylia to Singapore for specialist treatment, however, doctors there said her disease was too aggressive for them to treat. It had been the family’s only option to save Azaylia’s life but they are now spending time with their little one in comfortable surroundings at home.

Updating his Instagram followers, Ashley explained: ‘‘So last week we had the bone marrow test and the lumbar puncture and bloods taken to send to Singapore in the hope that they could create therapy to save Azaylia’s life.

‘Then we had to have a CT scan on her head and the results came back the next day to say she’s got two very big leukaemia tumours on her brain.

‘They also said that the chemotherapy that is usually given to treat leukaemia in the spine or on the brain will not be available because she has too much pressure with these tumours.’

The couple have vowed to make the most of all the time they have left with their daughter and Safiyya told her followers that she wants to ensure Azaylia’s last days are full of happiness.

Over the weekend, they shared footage of them getting keepsake castings of Azaylia’s hands and feet.

Got a showbiz story?
If you’ve got a celebrity story, video or pictures get in touch with the Metro.co.uk entertainment team by emailing us celebtips@metro.co.uk, calling 020 3615 2145 or by visiting our Submit Stuff page – we’d love to hear from you.


MORE : Ashley Cain and fiancée mark Azaylia being eight months old with keepsake castings of her hands and feet


MORE : Ashley Cain shares pictures of daughter Azaylia’s last bath in hospital before bringing her home as baby is given days to live