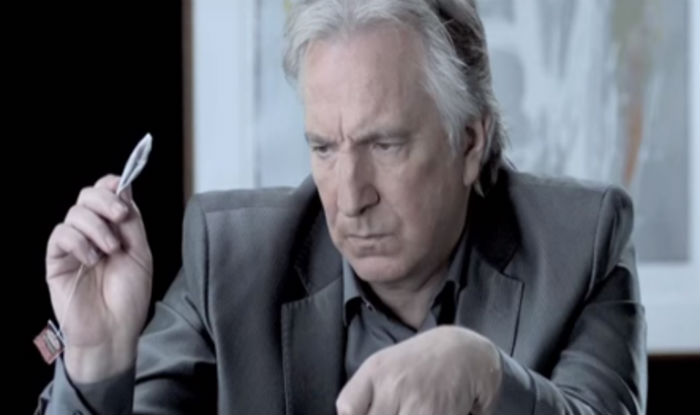 Los Angeles, Jan 14 : Many celebrities including writers JK Rowling, EL James, Stephen Fry, Eddie Izzard, Michael Ball among others paid tribute to British actor Alan Rickman, who died from cancer at the age of 69. “The actor and director Alan Rickman has died from cancer at the age of 69. He was surrounded by family and friends,” a family statement said today. “Harry Potter” author Rowling led the tributes to the star, who was famous as Professor Severus Snape in the movie adaptation of the best-selling novel. “There are no words to express how shocked and devastated I am to hear of Alan Rickman’s death. He was a magnificent actor & a wonderful man,” she wrote. “My thoughts are with Rima and the rest of Alan’s family. We have all lost a great talent. Also Read – Harry Potter Quiz Show Is Coming Soon To Mark The Movie’s 20th Anniversary Celebration – Details Here

They have lost part of their hearts,” she added. “What desperately sad news about Alan Rickman. A man of such talent, wicked charm and stunning screen & stage presence. He’ll be sorely missed,” wrote Fry. Popular British actor Izzard tweeted, “I do not want my heroes to die! Alan Rickman is dead and he was another hero. Alan – thank you for being with us. We are sorry you had to go.” “And now we have lost Alan Rickman. A gifted actor and lovely man. (Also Read: Nominations list for 88th Oscars) Also Read – Helen McCrory, Best Known as Narcissa Malfoy From Harry Potter, Dies of Cancer At 52, Daniel Radcliff Pays Tribute

What a week. #RIPAlanRickman,” Michael Ball posted. “This week can do one. #AlanRickman” actress Lauren Laverne, tweeted sighting reference to the death of legendary English singer David Bowie, who died on Monday at the age of 69, after his 18 month long secret battle with cancer. Poulter wrote, “Rest In Peace Alan Rickman. Such sad news. A huge loss.” “Fifty Shades of Grey” author James tweeted, “RIP Alan Rickman. You will be missed. #TrulyMadlyDeeply.” “There are few things I enjoyed more than watching Alan Rickman sigh in a movie. RIP,” wrote Seth Mayers. Also Read – Harry Potter And James Bond Actor Paul Ritter, Dies of Brain Tumor at 54

British singer-actor Tom Fletcher wrote, “So sad to hear that we’ve lost Alan Rickman. What a brilliantly talented man. Countless amazing performances. What a sad week.” Scottish DJ Edith Bowman tweeted, “Honoured to have spent time with the man. I was so nervous. This was just last April.” “He did so much brilliant work but Alan Rickman in Galaxy Quest: one of the greatest comedy performances ever. RIP,” tweeted British actor David Schneider along with Rickman’s video.