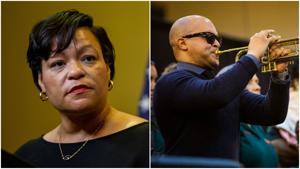 Pity the poor politician’s mouthpiece, whose duties will inevitably include standing up in public and making assertions that nobody could possibly believe.

Take, for instance, Beau Tidwell who was wheeled out to deal with some mild backlash after his boss, Mayor LaToya Cantrell, exhorted everyone to “support a true son of the city of New Orleans, Irvin Mayfield.”

Mayfield is almost as good at stealing vast sums of money as he is at blowing that horn, but it is presumably the latter talent that makes him a true son of the city. It is, however, the former that necessitated Cantrell’s call to arms, for Mayfield awaits sentencing after pleading guilty to living large on embezzled moolah.

While he faces up to five years in the federal pen, the only possible construction we can put on Cantrell’s remark is that she wants Judge Jay Zainey to give Mayfield less time, or maybe no time at all.

Here’s where Tidwell was required to earn his money with that time-honored trick of the PR trade, the pious whopper. “The mayor believes in second chances, and in that sense, she did reach out to (Mayfield) and offer her support as she would with any resident,” he said.

So Cantrell would arise to rally support if some Joe Schmo of New Orleans were caught ripping off a charitable foundation for more than a million bucks? Don’t be ridiculous. Mayfield is getting the VIP treatment.

Grace Notes: LaToya Cantrell should know better than to mess with libraries — or to support someone who stole from them

Maybe that’s fair enough; he is, after all, a VIP, and many people will fail to see any benefit in locking up a musician who has given so much pleasure, and who is strictly a nonviolent offender. Still, this country happily locks up huge numbers of its citizens for crimes less serious than Mayfield’s. If, as they asked you to believe in school, we are all equal in the eyes of the law, Mayfield ought to be singing a worried song.

There is at least one person in town who hopes Zainey throws the book at Mayfield and his partner in music and crime, Ronald Markham. Dixon Stetler hopes they get the maximum sentence for stealing $1.3 million from the foundation that handles donations to the city’s public libraries. Stetler’s animus makes sense, for she is director of the Friends of the Library.

It was, fittingly, Ray Nagin who paved the way for the great library rip-off when he was mayor. Perhaps Nagin, who was destined to do time for taking bribes, recognized in Mayfield a kindred spirit, when he named him the city’s “cultural ambassador,” and decided a trumpeter was the perfect choice to run the library system. Mayfield and Markham later took control of its support foundation and, with nary a peep from their fellow board members, robbed it blind.

Mayfield in his pomp played a gold-plated trumpet and laid his head in the finest New York hotels. That was all on stolen dollars, but it still seemed odd that, when he was caught, he was deemed poor enough to deserve an attorney at public expense.

As an international star, Mayfield always was an unlikely pauper, and now that he and Markham have started paying back $1.1 million, Cantrell calls on us to support Mayfield, but why we’ve been paying his legal bills all this time remains an open question.