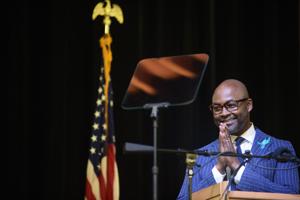 One of the promises that helped Jason Williams get elected as DA in New Orleans late last year was that he would never haul a juvenile defendant into an adult court.

It sure didn’t take long to renege on that one. And it was not even the first campaign promise that Williams has broken.

Williams apparently decided the way to win was not to stint on promises to liberalize the DA’s office. So he loudly proclaimed himself to be the polar opposite of his predecessor, Leon Cannizzaro, who, to put it mildly, was not in the business of mollycoddling criminals. If a kid committed a sufficiently heinous offense, Cannizzaro figured he should forfeit any right to the relatively lenient sentences available to juvenile judges.

Williams emphatically and repeatedly asserted that, if he won, kids would always be tried as kids. His rival candidates, former state judges Keva Landrum and Arthur Hunter, both repudiated the rigidly draconian mindset of the Cannizzaro era, but left open the possibility that really bad youths might be tried with the big boys. For Williams, it was absolutely no exceptions.

While we have all heard the rumor that not all Louisiana politicians tell the truth the whole time, there seemed no reason to doubt that Que’dyn Growe and Demond Thomas would be tried in juvenile court. They were arrested for allegedly killing Anita Irvin-LeViege with a fusillade from a high-powered rifle while she was delivering groceries to her in-laws. Irvin-LeViege managed to drive two blocks before crashing her car inside which police found her and her dog dead. They also booked the two youths with armed robbery for a carjacking committed less than an hour after the murder.

Growe and Thomas are both 15 years old, and there is no secret about what happens when young boys are locked up with hardened criminals.

With Williams having heralded a new, enlightened era, those youths seemed certain to avoid that fate.

But Williams suddenly channeled Cannizzaro to announce that the suspects were so depraved that they would be tried for second-degree murder in adult court. They do not face the mandatory life sentence that would apply to adult defendants, and will probably get out in a quarter of a century, but rehabilitation, which might be feasible in the juvenile system, is clearly out of the question.

This decision shows that Williams lacks the strength of his convictions, but we already knew that from the case of Dan Bright, who was released from death row when his murder conviction was overturned in 2004, but who was arrested again in 2019.

Williams, in a spectacular demonstration of prosecutorial discretion only hours after taking office, reduced an attempted murder charge to simple battery, a misdemeanor, so that Bright could plead guilty and walk.

Williams explained that he thought Bright was innocent, an odd reason to arrange a guilty plea. Williams had just pledged never to make a defendant plead guilty to a crime he didn’t commit.

If Bright got a bum rap when Cannizzaro was in charge, his luck changed when Williams won the election and hired a bunch of old comrades from his long career as a defense attorney. One of those old comrades was Emily Maw, whose former employer represented Bright. So did Williams. That was when we had a truly adversarial system.