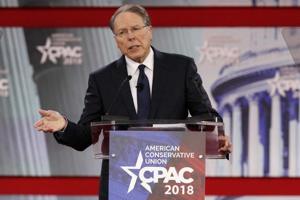 God may have given Americans the right to bear arms, but he did not show them all how to shoot straight.

Take a look, for instance, at that leaked videotape of Wayne LaPierre in Botswana, repeatedly failing to kill a wounded elephant at point-blank range. A guide eventually puts the beast out of its misery.

If this was embarrassing for LaPierre, it was only because, as national head of the NRA, he is billed as an accomplished big game hunter.

LaPierre thanked God for the Second Amendment after the 2018 school massacre in Parkland, Florida, so he isn’t the type to be squeamish about African wildlife.

His belief that the right to keep and bear arms is God-given found lots of support in Baton Rouge on Wednesday, when a House committee took up a bill to repeal the law requiring a permit to walk down the street with a gun in your pocket. Proponents of repeal had no doubt which side God was on.

It was no surprise that this bill cleared committee, as a similar one had in the Senate a day earlier. Louisiana voters in 2012 overwhelming approved a constitutional amendment making the right to bear arms “fundamental,” so that any restrictions to it must be “narrowly tailored” to a “compelling state interest.” That left us standing tall as the gun-totingest state in the Union.

We are not leading the way this time, for what is called “permitless concealed carry” is all the rage. Proponents of repealing the Louisiana law reeled off a list of states that have gone before. It seems that the Legislature favors giving any adult who is not a convicted criminal, a drunk or an addict, an untrammeled right to hide a weapon about his or her person in public. Polls show the public think that’s nuts and a veto is expected from Gov. John Bel Edwards.

Under current law, the permit that is required to carry a hidden gun is issued only after an applicant has undergone, and paid for, training in how to use it safely.

However, it is easy enough, even under current law, to avoid the inconvenience and expense of achieving firearm competence before getting rodded up to walk the streets. Just wear a pistol on your hip or sling a rifle over your shoulder and strut. There’s no law against carrying a weapon openly.

Anyone who wants to obtain a concealed carry permit will still be able to do so if the bill passes, and conscientious citizens will no doubt do so. But a lifetime permit costs $500, which will discourage many and which proponents cited as a reason to repeal the requirement. They noted that Americans do not otherwise have to reach for their wallets in order to exercise a constitutional right.

If concealed carry permits were no longer required, goofballs with no idea how to handle that gun hidden under their clothes will inevitably take to the streets. Proponents deny that public safety will be affected, but law enforcement, which speaks with some authority, disagrees. State Police and the Baton Rouge Police Department testified against the bill.

Passions always run high in legislative hearings about guns, which often stray from the point, as citizens giving evidence grow understandably flustered. On this occasion, for instance, an opponent of permitless carry assured believers that “suicide by gun is almost always fatal.” That’s hard to dispute whether or not you think that the Lord wants Smith and Wesson to prosper.