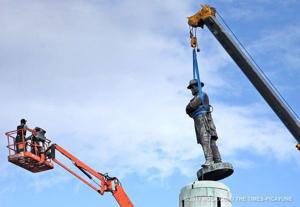 I never had the honor of meeting Louis Armstrong, which may be just as well, for it would have made for an awkward exchange.

When he welcomed me as a fellow son of New Orleans, I would have been obliged to correct the great man, for I never set foot in America during his lifetime.

Had such a meeting occurred, here is how such confusion could have arisen, if you believe a story in the paper the other day. I would certainly have said, “Good morning” or “Good evening.” Yet the paper assured us that, for natives of the city who live elsewhere, “that small gesture — bidding someone a good morning or evening — constitutes a calling card instantly identified with New Orleans.”

Anyone who has been anywhere, read any books or seen any movies will know that those are standard civilities throughout the English-speaking world. The suggestion that saying good morning or evening is distinctive of New Orleans is such obvious nonsense that comment would normally be superfluous.

On this occasion, however, something must be said. As the purge of Confederates, slavers and racists from cityscape nomenclature proceeds, a new name for Lee Circle has yet to be established. The latest suggestion is “Good Morning, Good Evening Circle,” and it has received an influential endorsement.

It would be an embarrassment if a major hub in one of the world’s most storied cities were to be saddled with such a banal and irrelevant mouthful. Yet Sue Mobley, who co-chairs a panel advising the New Orleans Street Renaming Commission, says the proposal is an unusually “thoughtful” one. “It is a moving reminder of why I love this place,” she says.

She also has another reason for her thumbs up. She notes that the Renaming Commission rarely receives a proposal from “someone so worthy” as the “Good Morning, Good Evening” advocate. He is Jerome Smith, a Freedom Rider and valiant veteran of bloody civil rights battles, who is now 82 years old. There is no question that he is an authentic hero of the campaign that saw the end of Jim Crow.

But what makes him a figure to revere may also make people reluctant to criticize or even disagree with him in any sphere. Yours truly may therefore be alone in saying, at least openly, that Smith’s idea ain’t so great. He must have misconstrued what Armstrong said to him in New York some 60 years ago.

According to the story in the paper, Smith somehow made his way backstage where Armstrong was performing. When he walked in, he addressed the room thus. “Good evening, everybody. How y’all doing?”

It was Armstrong himself who responded. “Hey, you gotta be from my place.” Armstrong, who left New Orleans for Chicago in 1922 must have heard a million good evenings traveling the world as the greatest jazz trumpeter of all. Perhaps it was Smith’s cadence, or the “y’all,” that tipped Armstrong off. It certainly wasn’t a mode of greeting that has been heard across the continents for countless generations.

Still, Smith is clearly right when he says the social graces have a civilizing effect, “an almost sacred power.” We should all be careful to say “good morning” or “good evening” to people we meet whether or not we agree about what to call that circle.