Great Barrington — On Saturday, June 13,  the little white church in Housatonic known as the Guthrie Center will celebrate a union activist killed by a U.S. firing squad 100 years ago in Utah. 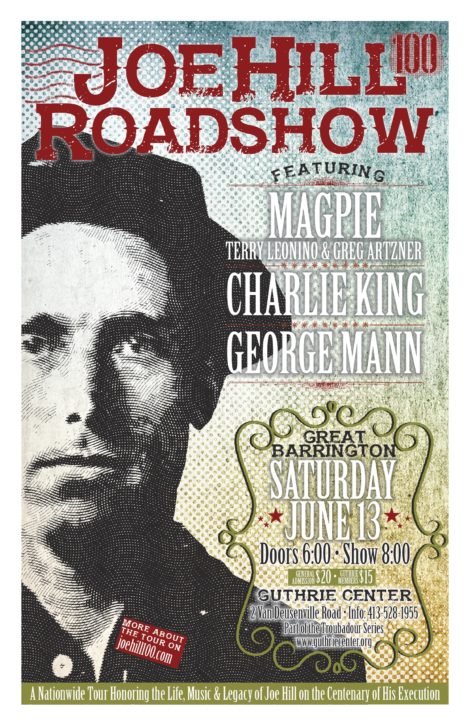 Joe Hill, the Swedish-born songwriter of “Casey Jones,” among other labor songs, will be remembered by the “Joe Hill 100 Roadshow,” a national concert tour. This leg of the tour features the award-winning duo Magpie, the singer-satirist Charlie King, and the acclaimed folk singer George Mann.

Part of the Guthrie Center’s Troubadour Series, the show begins at 8 p.m. at The Guthrie Center (doors open at 6), on 2 Van Deusenville Rd., Great Barrington. General admission is $20; Guthrie Center members, $15. For information, go to www.guthriecenter.org.

I spoke to Mann about Joe Hill, the show, and what to expect.

Simon Brown: Why were you interested in celebrating Joe Hill?

George Mann: We won’t be alive to commemorate the 200th anniversary of his murder by the State of Utah, over even President Woodrow Wilson’s requests not to execute him and to give him a fair trial. Joe remains one of labor’s most beloved songwriters and martyrs, 100 years after his death. And his songs and influence are part of our labor and folk music worlds even today.

SB: You carry on his legacy of protest songs; you released an anti-Bush album called “Hail to the Thief.” How have protest songs changed in the last hundred years?

GM: I don’t like the term “protest songs,” since that implies that we are “against” something. We make folk music – mostly acoustic, melodically based songs with words that mean something. Many of the ideas and songs that highlight them, both historic and contemporary, are proactive, not reactive. Many of Joe Hill’s songs are positive messages of unity, welcoming to all workers, regardless of background or gender, and his songs spoke of the “one big union.” 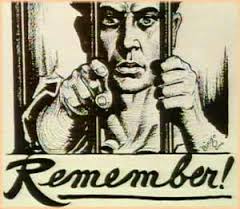 We seek the same freedom, fairness and voice today that they did 100 years ago, when Joe was hung for his beliefs and songs, in the absence of any evidence connecting him to the crime for which he was executed. So the songs are not that different, but they are not getting heard over the commercial clatter of Big Radio. It’s community and college stations that carry the folk music, for the most part, and help us keep it alive.

SB: You’ve worked with the folk singer Utah Phillips. Tell me about how you got to know him, and his significance in the legacy of Joe Hill.

GM: Utah Phillips, besides being one of the greatest songwriters and storytellers in this field of folk music, kept alive the music and history of the IWW (International Workers of the World), and especially Joe Hill’s songs. He put it all together in his presentation, onstage or on record – working-class history, wit and a sharp mind, songs, stories, and the struggles and suffering of so many people in his work… I was lucky to get to meet him and become friends with him late in his life. He is one of the guiding lights for all of us in the folk trade. Listening to Utah’s albums as a young union organizer helped turn me toward folk-singing full-time, later in life. 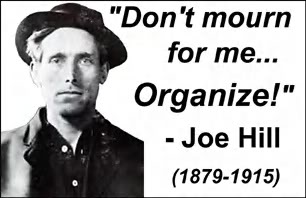 SB: Can you remember a time, hearing Hill’s music, that was particularly moving?

GM: I remember hearing Joan Baez sing “I Dreamed I Saw Joe Hill Last Night” on the Woodstock album which I would borrow from my older sister, and being moved by the song and story of the “man who never died.” But at eight years old, I couldn’t understand or process what it was about. Joe’s song “There is Power in The Union” is an incredible song, perfect for motivating people. The strength of Joe’s songs lies in that “worker’s shorthand,” as Utah used to call it. Joe’s lyrics cut through the crap and are clear as can be – we have one common enemy: the big corporations and those who own and control them!

SB: What can the audience expect on Saturday?

GM: A wonderful concert that will have all of us on stage, at times singing together, and doing songs on our own. While the night’s focus is on Joe Hill’s life and songs, we will be singing other songs that connect with the mission that Joe expressed, such as “The Preacher and The Slave,” “There is Power in A Union,” and “The Rebel Girl.” All of us are bringing songs of our favorite writers, besides our own, and of course, Joe Hill’s songs.