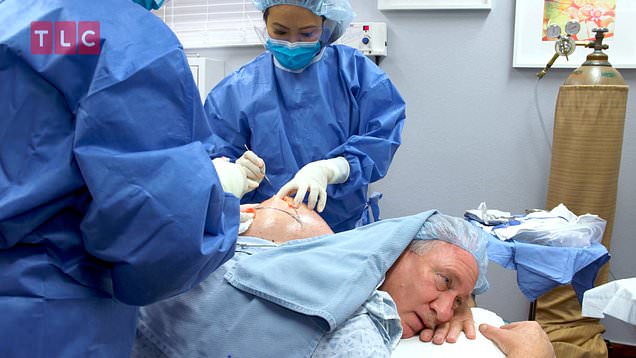 A 59-year-old his melon-sized lump removed from his back in life-changing surgery in an upcoming Dr Pimple Popper episode.

Tim has worked as a farmer for the best part of 40 years, but for the past decade, his work and social life have suffered as the result of the gigantic mass growing exponentially.

‘Now, it’s probably as big as a cantaloupe and I’m just thinking, how big will it get?’ he asked, before revealing the growth is heavy and makes his daily life a challenge.

‘I don’t go out to town, or a bar or meet people because of the lump,’ Tim added, admitting he often doesn’t attend social events with his friends out of embarrassment.

‘He’s got this big ball under his skin, this is the biggest thing that I’ve ever seen,’ Dr Lee exclaimed after first observing Tim’s lump. ‘I don’t know if you have the world record but I think you could be in the running!’

Given the size of the bump, surgery is a long, bloody and gruelling affair, made worse by the lipoma’s stubbornness.

Cutting into the lump, Dr Lee began by sticking her fingers into the incision and wiggling them around in an attempt to coax the lipoma out.

Eventually, she managed to snip it free from Tim’s body and popped the enormous mass of fat onto the scales.

‘I’ve given birth to two baby boys myself and neither of them were the size or the weight of this,’ she announced before she revealed that it weighed a staggering 12lb 9oz.

‘This is the heaviest mass that I’ve ever removed on somebody’s body – that was like a big baby,’ Dr Lee added.

Elsewhere on tonight’s episode, a 28-year-old arrived with a golf ball-shaped bump on the side of her shoulder – and Dr Lee has her work cut out as pus starts leaking out of her wound.