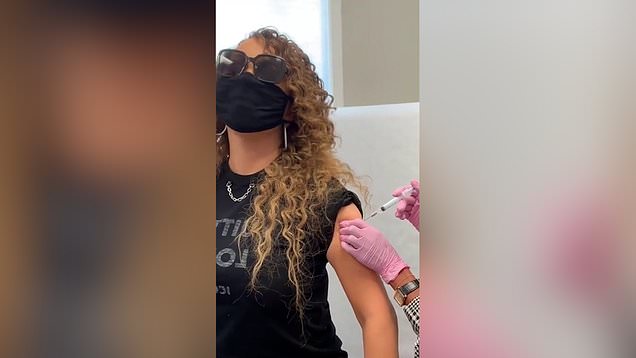 Mariah Carey reached new heights on Saturday after getting her Covid jab.

The singer, 52, shared a video of herself at the doctor’s surgery as she received the first dose of her coronavirus vaccination.

And the pop star put on a show in the best way she knows how by hitting a whistle note as the needle went into her arm.

In a clip posted on her Instagram page, the warbler said she was ‘excited and nervous a little about getting this shot’ and let out a yelp after getting pricked.

The musician dressed all in black with knee high boots while she hid behind a pair of dark shades to receive the injection.

‘They’re having a medical narrative but I’m here… ‘ Mariah enthused. ‘Excited and nervous a little about getting this shot.’

Referring to her chat, she added from behind her mask: ‘This is distracting them from doing their job but you know how I am, I just talk and I don’t really think about it.

‘OK so I’m calming down, a little nervous… about to get this shot…’

As the needle went into her upper arm the star let out a high note which sounded as if she was part singing, part screaming.

Referring to the high note, she captioned the video online: ‘Vaccine side effect: G6,’ along with a musical note.

Mariah’s doctor’s appointment may be a welcome distraction from her family life at the moment after her brother Morgan, 61, reportedly sued her over claims made in her memoir The Meaning of Mariah Carey.

The We Belong Together warbler discussed her tough childhood in the 2020 book, recalling moments of violence between her family members.

According to legal documents obtained by TMZ he says she falsely accused him of being a violent person.

Morgan is thought to be suing for defamation and intentional infliction of emotional distress, but is not clear how much money he is seeking.


MORE : David and Victoria Beckham lead celebrity Easter celebrations as they reunite with all children