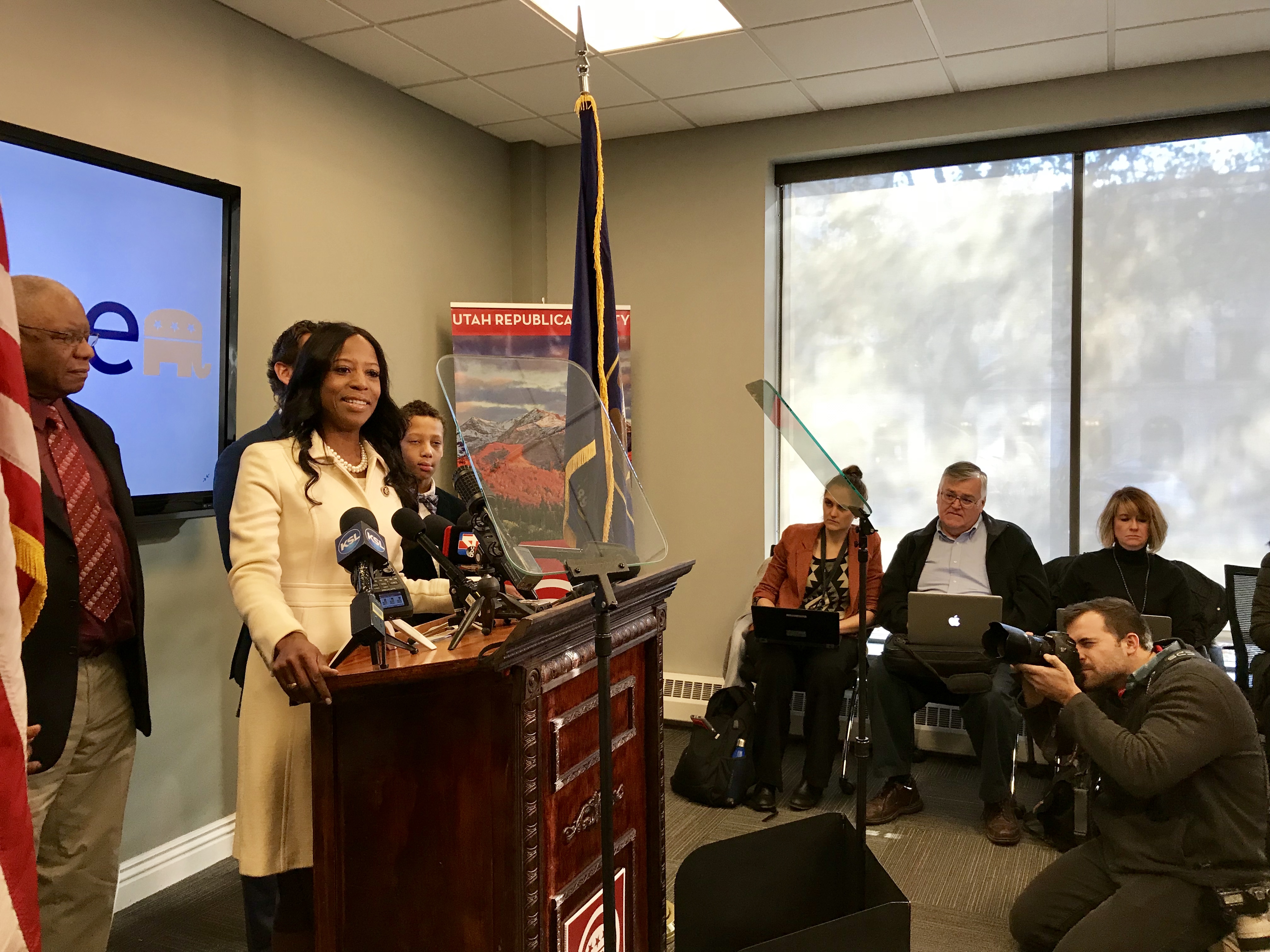 In her first public appearance since losing the 4th Congressional District race, Republican Rep. Mia Love took digs at President Trump, the GOP and her opponent, and said her loss means she is now “untethered” and “unshackled” to speak her mind.

“When President Trump took a jab at me because he thought that the race was over — and he lamented that I wouldn’t ask him to come to the state of Utah — I was somewhat surprised at first,” she said of Trump’s comments on Nov. 7 mocking Love and other GOP House candidates for losing.

“This gave me a clear vision of his world as it is: No real relationships, just convenient transactions,” said Love.

Love’s press conference Monday at the Utah GOP’s headquarters comes at the end of a brutal campaign that saw the two-term incumbent lose by fewer than 700 votes to Democratic Salt Lake County Mayor Ben McAdams.

Love said she called McAdams to concede over the weekend and “wish him well.” But the GOP congresswoman expressed few regrets about the campaign and said she was especially proud to have fought for the release of Joshua Holt, the Utah man imprisoned in Venezuela for two years.

“I am proud of the fact that I nagged the president everyday to bring Joshua Holt home,” she said. “He is an American, and all Americans should know that their country and their representatives will not forget or abandoned them.”

Love was joined by her family and a few supporters at the Monday press conference, where she also criticized the Republican Party for failing to court minority voters and allowing Democrats to make them feel like those voters have a “home.”

“I’ve seen the cost to conservatives for not truly taking people into their hearts,” she said. “Democrats saw newly elected black members and women to Congress in this election. This is a matter of fact — that Republicans lost in this regard.”

Love is the first black female Republican to serve in Congress. Asked whether she would run again in 2020, Love was noncommittal.

Describing the election as “horrible,” Love also lashed out at the media and the McAdams campaign for what she called “uneducated, unfair, irresponsible stories” about her ethics and record.

“I believe that we’ve elected a wolf in sheep’s clothing,” she said of McAdams. “But the question remains at what cost to the people of Utah?”

In a statement, McAdams’ campaign manager Andrew Roberts did not respond directly to Love’s comments, but said he wishes Love all the best.

“It is time to put the election behind us. Ben is focused on getting to work finding bipartisan solutions for Utah families,” said Roberts.

Love said come January, she will continue to fight for and promote conservative principles and values, regardless of her position.

“Best of all, I don’t need a title or permission to do that,” Love said.