The Pitch: In 1981, paranormal investigators/real-life-con-artists-but-nevermind Ed and Lorraine Warren (Patrick Wilson and Vera Farmiga) are on the front lines of yet another demonic possession — this time of eight-year-old David Glatzel (Julian Hilliard), who pretzels his body and speaks in tongues while under the influence of a demonic force. Their exorcism is interrupted, however, by the intervention of Arne Johnson (Ruairi O’Connor), boyfriend of David’s sister Debbie (Sarah Catherine Hook), who draws the demon out of young David…and into himself.

It’s not long after that that Arne commits a murder while ostensibly under the influence of said spirit, which draws the Warrens back on the case. This time, they’re not just looking to oust an evil force, but prove in a court of law that Arne’s crimes were the result of demonic possession. And along the way, they might just uncover more earthly forces with an agenda to draw these spirits into our world.

Back in the Saddle Again: While the original Conjuring was a chilling horror hit that spawned a hefty number of sequels since it first premiered in 2013 — from the uninspiring Annabelle and The Nun to the more-inventive Annabelle sequels, and so on — The Devil Made Me Do It is the first direct sequel we’ve had since 2016’s The Conjuring 2. Derived from another “based on a true story (with heavy asterisks)” case, this third entry drops us into Johnson’s real-life case, the first time demon possession was cited as a legal defense in a murder trial. 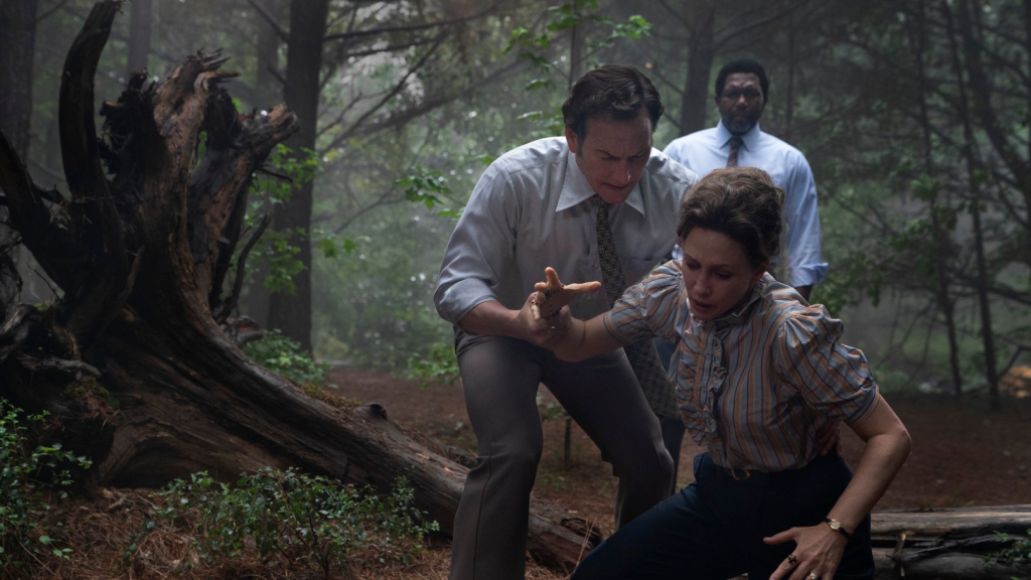 The Conjuring: The Devil Made Me Do It (Warner Bros. Pictures)

As such, director Michael Chaves (who previously directed The Curse of La Llorona) takes a different tack here, curiously leaning less towards outright scares and more towards the atmosphere of a police procedural. Granted, the usual James Wan-inspired tricks are here: the nostalgia-soaked ’70s aesthetic, the breath-catching long takes that lead to jump scares, the deliberate nods to horror films of the past.

This time, though, we’re left with diminishing returns: the jumps are hollow, the twists predictable, and the aforementioned references feel eye-rollingly obvious. A priest stands under a streetlamp holding a briefcase, Exorcist-style; a temporarily-possessed Ed stalks Lorraine in a demonic series of tunnels, limping while swinging a sledgehammer like he’s doing Jack Torrance cosplay. Chaves and cinematographer Michael Burgess may feel like they’re winking cleverly at the audience, but it comes across as self-indulgent.

It doesn’t help, of course, that the film’s seemingly deliberate shift from supernatural horror to police thriller puts a huge damper on the genre thrills that we’re supposed to feel with this otherwise strong series. There’s nothing wrong with playing with the genre and trying new things: hell, Annabelle Comes Home essentially serves as The Conjuring 2.5, switching gears into a fun teen-oriented haunted house ride with the Warrens deep in the periphery. But this time, they’ve moved from demonologists to detectives, David Leslie Johnson-McGoldrick awkwardly grafting them into an episodic, investigative film that struggles to build up any sense of suspense or momentum.

Compounding the issue is the film’s extended periods spent away from the charismatic Warrens with our new set of less-than-remarkable supporting characters. O’Connor’s Arne is a sweet enough boy, but he spends much of the time behind bars waiting for the Warrens to spiritually clear his name. John Noble shines in a few key scenes as a lapsed occult investigator, and Eugenie Bondurat’s sinister Occultist provides plenty of chilling stillness (when she finally shows up). But by the time we reach the bifurcated climax, you’ll be left wondering, “Why are these strangers the one doing the big exorcism at the end while Ed and Lorraine stalk each other in tunnels?” 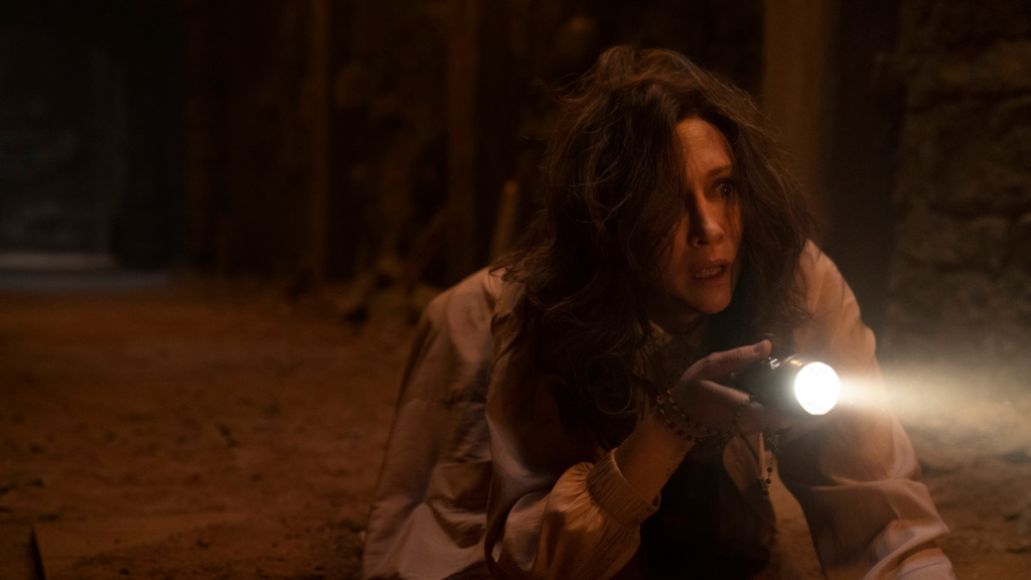 The Conjuring: The Devil Made Me Do It (Warner Bros. Pictures)

Love Means Never Having to Say “The Power of Christ Compels You”: Despite its problems, there are still fits and spurts of the third Conjuring that work, mostly when Wilson and Farmiga are on-screen. At this point, we know them as well as any horror protagonist we’ve met this century, and their settled, earnest love for each other is a refreshing change from the horny teens and tormented adults of horror films past. Granted, it’d be folly to project that kind of kindness on the real-life Warrens, but these handsome, well-coiffed versions of the duo serve nicely as idealized fantasy versions of the demon-hunting crusaders.

The Devil Made Me Do It cements the series’ focus on the Warrens as a great love that can survive whatever Satanic influences may stand in their way. It’s these moments that prove strangely comforting even in their darkest periods. Ed’s heart issues — teased throughout the series as a potential cause of his demise, like a coronary Sword of Damocles — are the closest the pair gets to true danger. Paradoxically, that we like the Warrens so much is a major hurdle in The Conjuring 3‘s fear factor: They’re just too hot, good, and in love with each other to get hurt. Plus, there are always more sequels to be made.

The Verdict: Honestly, points go to Chaves and crew for trying something different with The Devil Made Me Do It: perhaps recognizing the formula was getting stale, they decided to try balancing it with some new procedural tricks. But all it ends up doing is scattering the film’s sense of identity even further; we still get the scares, but they don’t work as well, mostly because they deal with people we don’t care about. The Warrens have too much plot armor to make them feel truly in peril, and it’s that unstoppability that makes the film lose more than a little bit of focus.

Where’s It Playing? The Conjuring: The Devil Made Me Do It crawls into your soul in theaters and HBO Max simultaneously on June 4th.