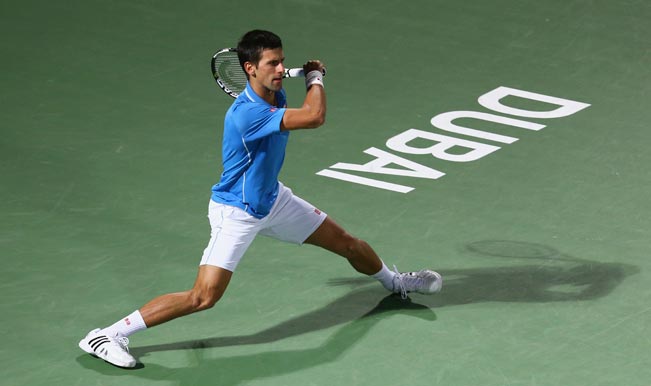 Novak Djokovic loves Shaikra! Yes sir, you read it right. The tennis ace can be seen in the video below grooving on one of Shaikra’s popular numbers! ‘Hips Don’t Lie’ was playing in the background as the Serb was shaking his hips in a dance class! Djokovic is the centre of attraction wherever he is and this was no different. Coming to another important point of discussion which is the Serb’s tennis and we will be watching closely. Djokovic will be gunning for a unique record come the start of the new season as far as the biggies go. Also Read – Greatness Resumes as Wimbledon Gets Set For a Grand Return on Star Sports Select

We are talking about Australian Open 2016 where the Serb will be looking to become the first man to win seven titles. He will also be looking for his third title in a row the second time around. Djokovic has a sense of mystic about him. Well that is certainly the case if you combine his slip and split. Also Read – VIDEO: Kid’s Reaction on Getting Racquet From Novak Djokovic After Historic French Open Win is Going Viral

The slip from the number one ranking and the split with coach Boris Becker. Djokovic has huge questions to answer. It was not long ago that he was reigning at the top in tennis before Andy Murray displaced him. The big question is that can he make a comeback and be ranked at the top of the rankings chart? Also, how many more Majors can he win from here on? (Tennis legend Boris Becker graces Kolkata 25K run)

He has lots of tennis left in them. But the debating point is that can he really play like he played before? There are no easy answers to such tough questions. What can you say about Djokovic? He was in the class of his own and would have been very hard to stop for anyone. He was eyeing history because he could have realistically become the first man to win 18 Majors.