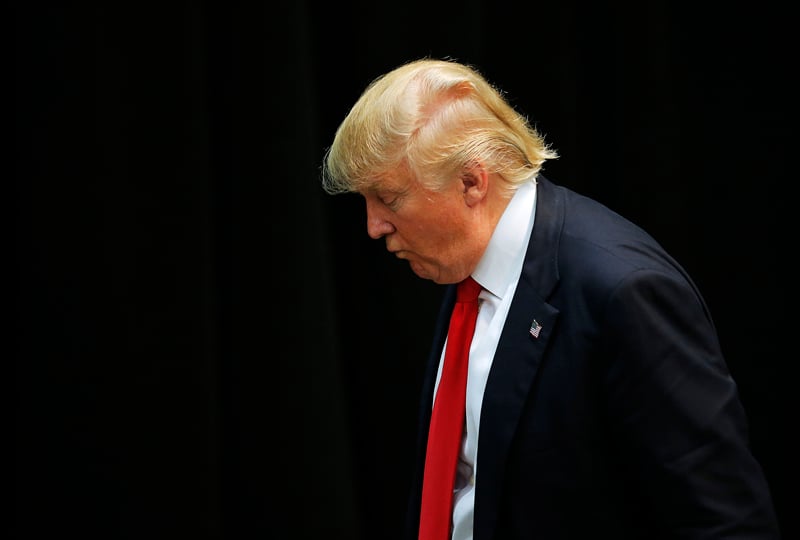 Republican presidential candidate Donald Trump looks down as he leaves a campaign event in Concord, N.C., on March 7, 2016. Photo courtesy of REUTERS/Chris Keane
*Editors: This photo may only be republished with RNS-REVIEW-TRUMP, originally transmitted on March 8, 2016.

(RNS) In an appeal to the faithful, 40 conservative Catholic leaders have denounced GOP front-runner Donald Trump as a demagogue and danger to the nation and the Republican Party.

The open letter appeared in The National Review on Monday (March 7), one day before the Michigan Republican primary, which could give Trump an almost-unbeatable delegate lead in the GOP nominating race if he posts a strong win.

Robert P. George, of Princeton University and George Weigel, a senior fellow at the Ethics and Public Policy Center, headed the charge, and the appeal was also signed by opinion leaders from academia and religious media.

The letter denounces Trump for “vulgarity, oafishness, shocking ignorance, and — we do not hesitate to use the word — demagoguery.”

Worse, they wrote, he’s the opposite of what Catholics should seek in a leader.

George and Weigel wrote of Trump that there is “nothing in his campaign or his previous record that gives us grounds for confidence that he genuinely shares our commitments to the right to life, to religious freedom and the rights of conscience, to rebuilding the marriage culture, or to … the principle of limited constitutional government.”

Those causes have been championed by the GOP, the authors wrote, but a Trump nomination would threaten the party’s commitment to those issues.

The appeal, in the pages of the magazine founded by conservative icon author William F. Buckley, Jr., comes less than a month after its editors issued a similar denunciation of Trump in its January edition.

“National Review is a failing publication that has lost it’s way. It’s circulation is way down w its influence being at an all time low. Sad!”

Trump’s recent kerfuffle with Pope Francis (who called the candidate’s stance on immigration “not Christian”) has not dissuaded Catholics.